You are here: Home » Blog » Knowledge is power: How genomic research transformed one woman’s fight against breast cancer

Knowledge is power: How genomic research transformed one woman’s fight against breast cancer 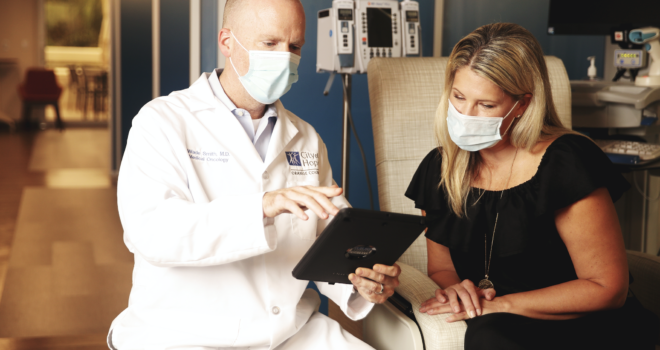 Sarah Sanders wasn’t shocked when she was diagnosed with breast cancer at age 41 in September 2015. In fact, she expected it.

That’s because Sanders has a strong family history of the disease on her father’s side. Her paternal grandmother died at age 35 from breast cancer, an aunt passed away at age 50, and another aunt was diagnosed in her 60s and successfully treated. This knowledge made all the difference in Sanders’ approach to her breast health.

“Call it whatever you believe in, but this was put on my heart at a very young age,” she said. “I sort of always knew this was coming for me, and I do not mean that in a negative way. I mean it in an ‘I need to be proactive’ way. Maybe it’s my grandmother – maybe she’s my guardian angel.”

Another thing that made all the difference in her breast cancer care was her choice of oncologist., Wade Smith, M.D. who specializes in breast cancer treatment at City of Hope Newport Beach. After her tumor was removed, Dr, Smith performed cutting-edge genomic testing that determined chemotherapy wasn’t necessary. Sanders said that when Dr. Smith told her the news, it was the only time she cried.

“Had he not been on top of that, I would’ve lost my hair, my body would’ve gone through hell, and it would have been unnecessary in my case,” Sanders said. “He represents everything City of Hope stands for.”

Sanders also appreciates the environment of City of Hope’s Newport Beach facility and the staff, whom she describes as the “best in their field.” Once, when her validated parking ticket didn’t work, “the woman at the front desk said, ‘Oh honey, don’t worry about it. Get in your car and I’ll figure it out.’

“And here’s this medical professional in scrubs, manually lifting up the gate of a parking structure to let my car out,” Sanders said. “That really spoke to me.”

Sanders is approaching the five-year mark in her cancer journey, and she recognizes how important it is that her tumor was discovered early. Sanders’ family history caught the attention of her OB/GYN, who referred her for genetic and other testing. Sanders learned that she had the ATM mutation that increased her cancer risk. Then an MRI revealed a small tumor in its early stages, close to her armpit, that may not have been caught with a traditional mammogram. Because of the gene mutation and her family history, Sanders chose to have a double mastectomy.

Recuperating from the procedure was challenging. Pre-diagnosis, Sanders led a take-charge lifestyle. An insurance underwriter since graduating from college in 1996, she also owned five Jersey Mike franchises with her then-husband, and she co-founded a dog rescue organization, Take Me Home. For Sanders, the most “life-changing aspect” of breast cancer was letting someone else take care of her – specifically, her mom, Teri, who basically moved into Sanders’ home to help her.

“I reconnected with her in a massive way,” Sanders said. “We still laugh when we talk about her trying to give me a shower. I’m a grown woman in the shower with my mom, who would put on a bathing suit, and I have all these drains hanging out of me. But she would wash my hair, and we would just laugh.

Between the mastectomy, reconstructive surgery, an infection, and a hysterectomy, Sanders had six surgeries within one year. During this time, she was referred to Jeffrey Weitzel, M.D, a City of Hope clinical geneticist who studies the ATM mutation and took her care “to a level no one else can match.”

“First, it made me aware of other cancer risks I have because of the mutation,” Sanders said. “More important is the peace of mind, knowing my care is with the ‘A’ team. I am with the institution that’s going to have the most cutting-edge technology and advanced medical science. City of Hope is the place to be if you are a patient with a genetic mutation.”

Sanders urges people – especially those with a family history of breast cancer – to take advantage of City of Hope’s personalized and highly specialized care.

“There is a massive difference when you are being monitored by a compassionate, technologically advanced cancer center like City of Hope and detecting cancer early,” Sanders said. “I never looked like a cancer patient because I was treated by specialists like Dr. Smith. So that’s my battle cry.

⇐ Neglected Breast Cancer Is an Issue, But It Doesn’t Have to Be
Flu shot remains a must for cancer patients ⇒
Go to Top